A story of one dish: Pkhali

Vegetables, spicy nut dressing and a large diversity of variations - these are, perhaps, the three best ways to describe the famous Georgian appetizer.

What is meant by ‘pkhali’ 99% of the time? Multi-colored balls made out of vegetables ground with walnuts. But the popular Georgian starter can be found in many different forms. Its main feature is that, in fact, pkhali is not so much a dish as it is a method of preparation. It is a more general concept, so to say - like, for example, bouillon or ragout. The ingredients may vary, but the cooking method is the same. The same goes with pkhali: traditionally it consists of two parts - ground vegetables or herbs and a nut dressing. And the variations can be endless. 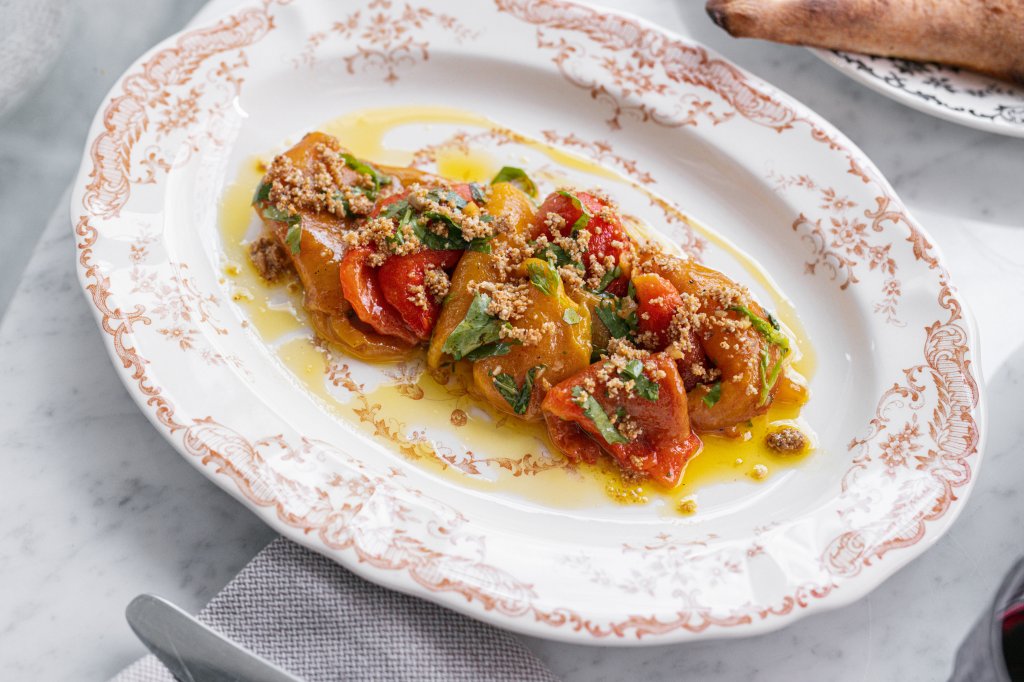 The filling: from veggies to meat

When pkhali appeared several centuries ago in Adjara, their recipe was specific - the vegetable base was made of collard greens (that is what ‘pkhali’ translates to from Georgian). However, as the popularity of the dish gradually spread throughout the country, hundreds of variations were created. There are 200 different recipes recorded in cookbooks alone. Pkhali can be made out of spinach, beans, beets (with their greens), carrots, bell peppers and herbs. Even chicken or beef tongue can appear as an ingredient! The recipe also depends on the region. For example, in Khevsureti (in Eastern Georgia) pkhali are seasoned with a mixture of various herbs, spices, garlic and onions. And in Guria, in the West of the country, rice is added to the appetizer. However, most often pkhali is a vegetable dish, and therefore ideal for fasting. So there’s probably no coincidence that ‘Pkhali day’ in Georgia is celebrated on January 4th, during the Nativity Fast.

In Georgia there is a whole day dedicated to pkhali - the 4th of January. 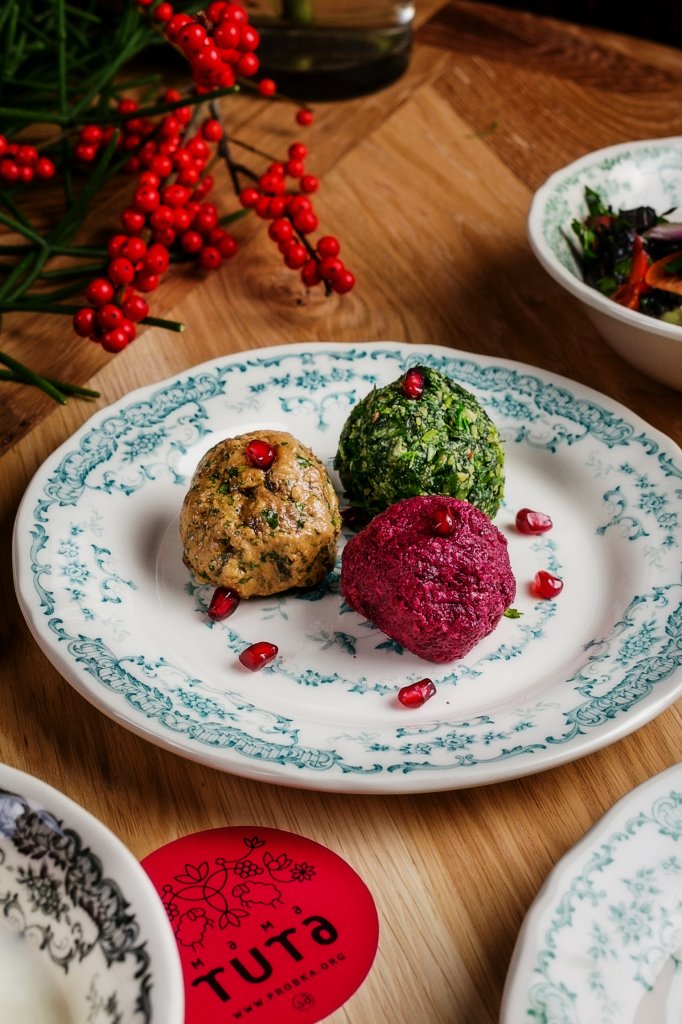 What is more important: the base or the dressing?

The vase of the pkhali is a vegetable pâté. The vegetables for pkhali can be blanched, boiled, stewed, baked, grilled or, rarely, left raw. Greens are often added to them - cilantro, parsley, oregano. Traditionally, one type of vegetable is used in one type of pkhali. But a recipe can sometimes call for a blend: for example, they make pkhali noir of zucchini and eggplant or from two sorts of cabbage - cauliflower and broccoli.

It is said that the dressing for the pkhali plays a bigger role than the base, since that is what gives the dish a characteristic taste. It must include walnuts, garlic, salt, fresh greens (most commonly - cilantro), chmeli-suneli. And then, as with the base, the experiments begin: vegetable oil, vinegar, ground pepper, saffron and other seasonings can be added to the dressing.

The base is then finely ground together with the nut dressing until smooth. So, perhaps, it cannot be said what is more important here, as one cannot exist without the other. 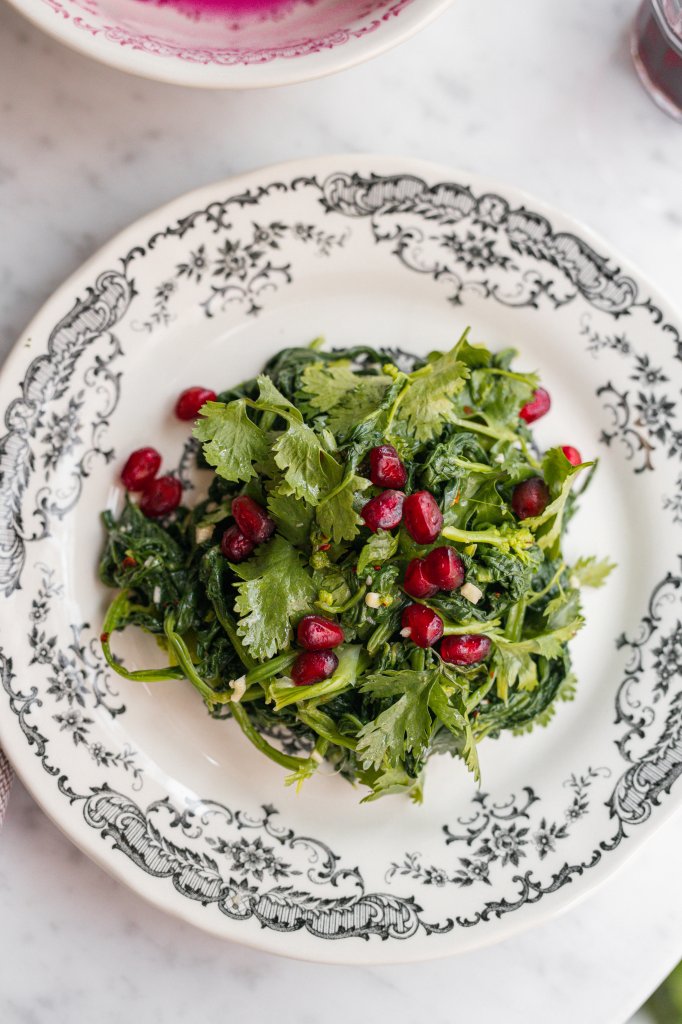 Serving methods: from balls to pâté

The methods of serving pkhali are no less varied. Small balls or patties are formed from the ground blend of veggies and walnuts, with a final touch of pomegranate grains as garnish. It is also possible to make thick ‘cakes’ with a dent in the center, spreading them in a salad bowl or on a large platter in an even layer, like baba ganoush or hummus. An assortment can be made out of the pkhali-balls (or patties) - “pkhaleuli” - a more festive option.

But there is also one completely different way of serving the starter, as well as preparing it. According to Gia Khuchua, the Georgian brand chef of AM Restaurants, a very simple version of pkhali is made in Eastern Georgia (Kakheti, Tbilisi). Basically, the vegetables or herbs (spinach, pepper, wild garlic, nettle) are slightly boiled or simply baked without being chopped at all. They are served after being garnished with oil and a small amount of nuts. This dish does not look at all like the ‘usual’ pkhali, more like seasoned vegetables, but is also considered a traditional variation nonetheless. This version of the starter is also lighter than the hearty nutty pkhali, and is also the version that is offered at our Mama Tuta restaurants during Lent.

The name of the appetizer also has a second option - “mkhali”. It appeared in the middle of the 19th century when there were many Russians in Tiflis (Tbilisi) - the latter seemed more euphonious to them than the traditional “pkhali”.
Back
Other categories
Read also
Lebanese spices
Breakfast in Lebanon
Reservation
Subscribe to news
Ask Aram Mnatsakanov a question
To send a resume